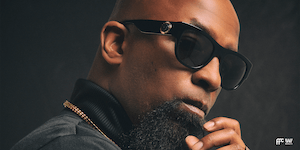 iCal
Google
Tech N9ne will be performing at Wooly's on Wednesday, May 19th, 2021.

While crafting what would be one of the most important albums of his career, Tech N9ne thought back to some of his early material. Before Strange Music became the No. 1 independent rap music label, the Kansas City rapper released The Calm Before The Storm. The acclaimed collection included songs that hinted at the type of artist he would become, from the conceptually rich “Questions” to the devilishly clever “Mitch Bade.”

So for The Storm, Tech N9ne wanted to revisit and build upon his musical foundation. “I knew if I named it The Storm, it would push me to do the best music I’ve ever done,” Tech N9ne explains. “I’m coming off of Special Effects, which featured songs with Eminem, Krizz Kaliko, 2 Chainz, B.o.B and T.I. But it’s not just the features. It was a big record, period. I just couldn’t come with a title that wasn’t going to push me. It actually pushed me to do some damn good music, man.”

The resulting The Storm features Tech N9ne delivering 20 stellar songs that fit into three sonic worlds. The Storm kicks off with the “Kingdom” section, a showcase for the rapper’s narcissistic side. He then travels to “Clown Town,” which finds him at his darkest. The set closes with the “G. Zone,” a nod to the gangster side of his personality.

Longtime Tech N9ne fans will recognize this type of layered artistry, something he introduced on 2001’s Anghellic, his first national release and the first album released on Strange Music. Anghellic features Tech N9ne navigating through “Hell,” “Purgatory” and “Heaven.” The conceptual master later explored his “The King,” “The Clown” and “The G” personas on his 2006 album, Everready (The Religion).

With The Storm, Tech N9ne reintroduces “The King,” “The Clown” and “The G” to his longtime listeners. He also introduces them to his new fans, people who may have become Technicians thanks to his more recent material, including the gold certified singles “Fragile” with Kendrick Lamar and ¡Mayday!, as well as “Hood Go Crazy” with 2 Chainz and B.o.B.

The Storm’s first single “Erbody But Me” fits perfectly in the “Kingdom” section of The Storm. On the kinetic cut, Tech N9ne deflects detractors and salutes his swag, while the percussive “Wifi (WeeFee)” trumpets Tech N9ne’s status as a plug as he delivers some intricate alliterative rhyming. Elsewhere, the raucous “Sriracha” features Logic and Joyner Lucas, both of whom asked Tech N9ne to appear on the cut after hearing an early version of the Michael “Seven” Summers-produced cut. Thanks in part to his guests on the song, “Sriracha” evolved into something different from how Tech N9ne first imagined it.

“It was not meant to turn into a chopper song, but Joyner Lucas, whenever he gets on anything, he has to kill everything,” Tech N9ne explains. “Almost nobody ever sends me tracks for real, so the people that send me ones are brave. Joyner Lucas sent me one because he’s a brave soul. That’s cool ‘cause I’m usually the one always sending tracks out. So what I did on ‘Sriracha’ is what the beat needed.”

Things get confrontational on the mesmerizing “Get Off Me,” a collaboration with Problem and Strange Music’s recently signed new artist, Darrein Safron. The three showcase their braggadocio side with high-powered lyricism, something that was of particular importance to Darrein. Tech N9ne says that because Safron in known as an R&B singer, people don’t think he can rap. “He’s a product of his environment,” Tech N9ne says. “He’s not trying to act like nobody. He’s like, ‘These people don’t think I can rap.’ So he rapped and he killed it. I love that. Problem did what he does and he killed it to. Everyone’s going to love this song when they hear it.”

Tech N9ne descends into “Clown Town” with “I Get It Now,” the darkest portion of the album, which details the rapper’s longstanding struggle with not fitting into the traditional rap world, while “Hold On Me” features him taking a sobering look at his relationships with women. Then there’s “Poisoning The Well,” which showcases a bluesy sound. As Tech N9ne emerges into the “G. Zone” section of the album, he laments that he’s not as successful and acclaimed as he should be on “The Needle” and he imagines getting away to find peace on “Anywhere” with Marsha Ambrosius.

Tech N9ne’s creative prowess shines throughout The Storm, as does the work of primary producer Michael “Seven” Summers. “We’re a great team,” Tech N9ne says. “We bounce ideas off each other all the time. Seven is just so diverse that he can do a song like the one I did with Jonathan Davis on here called ‘Starting To Turn,’ which is super metal, and then turn around and do ‘Get Off Me’ with Problem and Darrein Safron. He’s also able to do ‘No Gun Control’ with Gary Clark Jr. and Krizz Kaliko and then do ‘Buss Serves,’ the Too $hort remake of ‘CussWords.’ If I had a word for Seven, it would be ambidextrous.”

For his own work, Tech N9ne has a high standard. “I have to rap against Tech N9ne every time I do a record,” he says. “And that’s hard to do.” Tech N9ne has been doing just that since he emerged in the mid-1990s. Subsequently, the visionary rapper has become as one of the genre’s most prolific and acclaimed artists. He and business partner Travis O’Guin have built Strange Music into the industry standard with robust music, touring and merchandise components. Even though Strange Music remains fiercely independent, Tech N9ne still enjoys major label level success. He earned his second and third gold certifications in 2016 for his “Fragile” and “Hood Go Crazy” singles, testaments to O’Guin’s and his dedication to the company. “Reinvest, reinvest, reinvest,” Tech N9ne says. “That’s how you build. That’s how we built this empire.”

As Strange Music grew into a music industry force, it developed a reputation over the last decade-plus as one of the only reliable businesses in the field. All of that made the The Storm so striking to Tech N9ne’s fans and Tech N9ne himself, but the workload is not easy. “It’s hard, but I make sure that I have some happiness around me at all times” Tech says.

Jonathan McCollum, better known by his stage name Rittz, is an American rapper. He was previously signed to Tech N9ne's Strange Music label and just started his own label Cli-n-tel Ent. His debut album The Life and Times of Jonny Valiant was released on April 30, 2013.

Samuel William Christopher Watson IV, better known by his stage name Krizz Kaliko, is an American rapper, singer, and songwriter. He is a longtime collaborator with fellow hometown native Tech N9ne and is signed to his label Strange Music from its inception since 1999.

With a killer flow, thoughtful lyrics, and unrelenting determination, King Iso is the perfect fit for Strange Music. Already part of the family, Iso has been rocking Strange shows and hopping on Strange tracks for some time now.

MAEZ301, Strange Music's newest signee, independently released his Nowhere project at the end of 2017. It caught the attention of Strange Music. From there, Maez301 appeared on “Unbreakable” and “Tremble,” two stellar selections from Big Scoob's 2018 LP, Duality.

Hailing from the Empire State, Jehry Robinson has established himself as a musical force to be reckoned with. Drawing inspiration from artists such as Wyclef, J Cole and fellow New Yorker, Jay Z, Jehry came up on the independent scene, producing many of his own beats and releasing music with his FBA management before signing to Strange Music in December 2019. Fusing his influences of hip hop, alternative, reggae and pop, Jehry weaves a sonic tapestry that's instantly engaging. His first Strange release, 20/Twenty - Chapter 1, charted at #23 on the Billboard Rap chart upon its release. No stranger to touring, Jehry is looking forward to embracing the fans of his music face-to-face as he continues to develop as an artist with more release set to come. New year, new music and a rising vision from Jehry Robinson as 20/Twenty continues to come into focus.