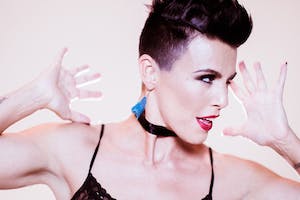 “The sound of some one not only embracing the future, but creating it. ”

Melding pop music with electronic rock and chamber compositions, Bonne’s music continues to push the boundaries of original rock/pop music. Her songs have charted as high as #1 on college radio stations and her single “Step Back Baby’ broke Iowa’s glass ceiling by being the first independently released song to break into Des Moines’ commercial Top 40 radio station STAR 102.5FM.

Bonne received an Upper Midwest EMMY® award for her Original Score/Song for the Cultural Documentary “FarmHer” (2016 - ‘Make My Day’) and received the prestigious nomination for BEST POP ALBUM by the 2020 Independent Music Awards for her album Gauntlet.

Numerous songs have been featured on television shows such as: MTV’s The Real World; E! Keeping Up With The Kardashians; Oxygen’s Total Divas.

Utilizing digital interfaces most traditionally used in the EDM genre (i.e. ProTools & Digital Performer), Bonne utilizes this technology to create & perform an entirely unique form of rock/pop music. From layered drum opuses to "guitar" solos to cinematic orchestral compositions to arena rock drums, Bonne’s unique sound comes from combining these original and electronic compositions with LIVE instrumentation both in the studio and on stage.

Darian Taylor is a singer/ songwriter, performer and entertainer from Des Moines, Iowa. On top of writing, singing, recording and producing all of her own music, she is a self-taught pianist who composes and accompanies herself all from the comfort of her bedroom.

In November 2018 Darian’s first single “Foolish” was released, which kicked off her professional music career. Not long after, she released her first album “The Perfectionist” in March and began performing live around the metro. You may recognize her from “Saturday Live Music” at DSM Brew, “Tunes on the Terrace” at Café Baratta’s, “Friday Live Music” at The Continental and the 2019 World Food and Music Festival. She even became the face of DSM Brew’s Open Mic Thursday Nights in their Summer 2019 advertisement campaign. Speaking of open mic nights, you may have also caught her performing at The Basement, Kelly’s Little Nipper or Java Joe’s.

Darian Taylor has had her music played on Iowa Public Radio and The CW’s “Iowa Live” segment. In August 2019 she sang the National Anthem at an Iowa Cubs Game and was honored to be asked to return and perform during the playoffs later that season. She has worked with the President of the Iowa Veterans Perspective to create and record a song from the poem “When the Boys in Blue are Gone”, which was used for a Veteran’s Day documentary aired on KCWI and ABC Local 5. She was even asked to perform at their annual fundraising event.

While 2020 may have been a heck of a year, Taylor didn’t stop moving forward. She released her second album “Just Begun” in April and has had her single “In the Fire” spun on Iowa Public Radio. Virtual performances became the norm and she made appearances on The CW’s “Iowa Live” as well as ABC Local 5 where they aired her submission for National Public Radio’s “2020 Tiny Desk Contest”.

Today Darian Taylor is continuing to write and produce new music. Some of which she performed live as the Guest of the Day on Channel 13's "Hello Iowa!". A major first for Darian Taylor will be her performance at Wooly’s opening the show for Bonne Finken as it is her first time hitting this renowned Des Moines stage.